“A community is made up of intimate relationships among diversified types of individuals.”- Caroll Qiugley

Although a Harvard man, Quigley’s definition of community applies neatly to FOCUS on New Haven, Dwight Hall at Yale’s annual pre-orientation program. Yale students are very much New Haven residents; they will live in New Haven for at least nine months of every year throughout their college careers. What makes FOCUS unique is that, by the end of the pre-orientation week, its participants are not only residents of New Haven, but also members of the New Haven community, in the sense that they have built “intimate relationships” with both Yalies and native New Haveners alike. 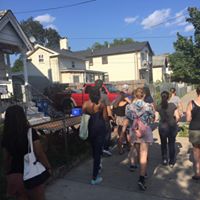 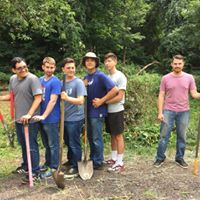 For  Marty Chandler ‘21, building these sorts of relationships meant learning the stories of the individuals he worked with at the Sunrise Cafe and Downtown Evening Soup Kitchen:

“I think the stories of individuals are fascinating, and working at the Sunrise Cafe and Community Soup Kitchen allowed us to open up people's books and hear chapters of New Haven residents' stories. I feel so much more aligned with the dynamic and community of this city because of our work and the FOCUS program. Now, we can see people walking the streets that we've met through our service, and remember their stories.”

Through FOCUS, Caleb Cohen ‘21 made friends he’ll have for the rest of his four years at Yale. He also redefined his view of community service, in way that emphasizes collaboration and building relationships with individuals, rather than just checking a box on a resume.

"I'm so glad I signed up for FOCUS. Through the program I met some of my best friends at Yale, and gained an understanding of New Haven from outside the 'Yale Bubble.' The volunteer work we did as a group changed my idea of what community service was. In high school, community service was a requirement. It felt very controlled and had a pretty small effect on my town. In just one week in New Haven I learned that community service makes a concrete difference in the city. It is a collaboration rather than a one-way road, and can be really fun and fulfilling when done with a group like FOCUS."

FOCUS inspired Eliana Swerdlow ‘21 to continue to develop relationships with New Haveners off campus through further service, giving her a vision for her experiences at Yale both in and out of the classroom.

“My experience at FOCUS helped me envision the way I want to spend my four years at Yale. FOCUS helped me realize that as a Yale student, I have the responsibility to be concerned and engaged in New Haven’s matters. I am now more motivated to get off campus for service opportunities, such as volunteering at Sunrise Cafe and Community Soup Kitchen, so that I can connect with New Haven residents. Lastly, FOCUS helped me connect with other Yale students who have inspired me to pursue an education that pushes me to learn for the sake of the common good.” 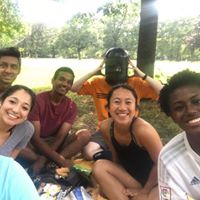 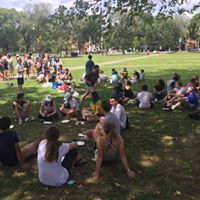 The other participants in FOCUS-the other individuals working to build a larger New Haven community- are our Dwight Hall community partners. As Caleb and his peers learned during FOCUS, our work here at Dwight Hall is a collaboration; it is important that both Yale students and our community partners benefit from our service work. Jilan Crowley, the executive director of Food in Service to the Homebound (FISH) and an outstanding member of the New Haven community in her own right, hosted a FOCUS group this year:

“That is a take charge bunch of students! Led (very subtly and adroitly I might add) by Me’Lena Laudig ‘19, they were a very productive and lovely bunch who were fully engaged, creative in approach, and enthusiastic in demeanor. They put in long hours and helped us tremendously. They are sterling representatives of your undergraduates.”

FOCUS 2017 was a success: as with every year, we helped to build the New Haven community by serving as a platform for students to build relationships with other community members, and we helped students feel more prepared to begin their Yale careers. However, FOCUS 2017 was perhaps more a success than in years passed, as the number of participants increased by nearly 125%. 74 participants worked alongside 22 FOCUS leaders and 11 community partner sites.  We hope to expand our programming further in the coming years, so that we can build even more relationships, and do our part to bridge the perceived Yale-New Haven divide.

About FOCUS on New Haven:
Since 1991 FOCUS has been introducing Yale students to the city of New Haven through a unique programming mix of guest speakers, guided discussions, and community service. FOCUS encourages student participants to engage with the broader New Haven community through daily service with partner sites; to grow and think critically of their role as students in service through guided discussions with their peers; and to broaden their perspectives through a guest speaker series.

Historically, FOCUS had been offered exclusively for sophomores and transfer students; however,  Dwight Hall recognizes the importance of engaging students who are dedicated to service and social justice early on in their Yale career.  Accordingly, Dwight Hall welcomed first year students to the program in 2016 and made the change permanent following a successful pilot.

For more stories, check out the Voices and Stories Archive page.